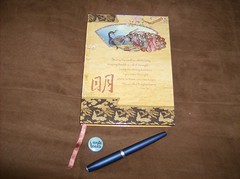 Stephanie, Colin, and a friend of theirs started this website called Me in Three, which is up but not quite because they're busy changing the URL. When it is up for real, I'll link you.

1) Grab three things that describe you in some way. You can go the deep route and try to encompass your entire being, or you can go with a theme, like I did in the above picture. (I might do a math one next, actually. Hm.)
2) Take a picture with all three items in the picture.
3) Email it to meinthree@gmail.com. Include your name (a nickname is fine) and a description of the items. Tell them I sent you.
4) Wait for it to go live on the site.
5) Enjoy!

I made a physical calendar of things to do before graduation so I could count the days. (Yikes!) Besides having one month and four days before G-day, here's a breakdown of how many classes I have left, assuming no more classes are canceled.

* Five yoga classes (This Monday's class is canceled, or rather, we can come in during a given time that doesn't work well for me and do whatever we want yoga-related. We also have a short assignment, and I'm going to discuss mine in class on Wednesday so I can forget about it until then.)
* Five nonfiction classes (This Wednesday's class is canceled in partial exchange for our attending the Writer's Festival events. Did I mention that I met Junot Diaz, and that I have photographic evidence of such?)
* Eight complex classes (The only day complex was canceled was the day we had the second test out, so I'm counting on all eight of these days happening. Skipping math classes has been shown to be detrimental to your mathematical health.)
* Four more senior seminar meetings (I don't know what we're doing the day the paper is due. Dr. Ojo has the most detailed syllabi ever, but on that day it just says that the papers are due.)
* Four more 490 meetings (again, assuming we're actually meeting while I'm writing the paper. We probably will.)
* Seven more French classes (Thursday's class was canceled, and we've had another class or two canceled through the semester. I'm not banking on it, though.)

On the bright side, we don't have classes on Good Friday thanks to Jesus dying and all that. Religious holidays are finally good for something. And of course, there are no classes on SpARC day, but I'm involved with that, so that day's no holiday for me.

As for yoga, I have perfect attendance so far, and I can afford to miss a couple of days and still pass the class. Hell, Lara encouraged it last week when she pointed out that I still have perfect attendance. Skipping the last two classes is awfully appealing right now, the first right before a nonfiction draft is due and before SpARC and the second before my final senior seminar paper and 490 paper are due.

Yup, tempting. I probably will, knowing my procrastination powers.
Collapse